Muhammad Ali was a world boxing legend and one of the greatest athletes of the 20th century. He was the first to win the world title three times in the heavyweight division of professional boxing and one of the symbols of the African-American community for political and social rights.

Photographer Thomas Hoepker had the opportunity to spend time with Muhammad Ali and photograph him in 1960, when he won the gold medal at the Rome Olympics, in 1966, when Ali was already a world champion, in 1970 when, after several years of forced absence, he was preparing for the “Battle of the Century” against Joe Frazier and years later, when he was already weakened by Parkinson’s disease.

In 1966, Hoepker was working for the German magazine Stern when he and his wife – a journalist – were assigned to meet him in London, where the famous boxer would compete with Brian London.

Ali had just converted to Islam, and was so busy that Hoepker and his wife could not arrange interviews and photographs with him. So they just decided to follow him and observe him. However, Ali was the ideal model for Hoepker, he was sociable, he was confident, he was himself and for that reason, Hoepker always had to be alert. Ali did not pose and would not repeat anything a second time.

Returning to Hamburg and showing the material to the magazine, he was told that if he could photograph him again, he would do so.

The opportunity comes six months later in America. And there things are easier for Hoepker. Ali is in his “home”. Hoepker visits him at the gym during training. In a short break between laps, Ali sees him, approaches him, extends his fist to the lens – right, left, right – the bell rings and Ali returns to the ring. Ali’s three hits, three shots for Hoepker. The sharpest and the one with the correct exposure, becomes one of the most famous and classic photo of Muhammad Ali. 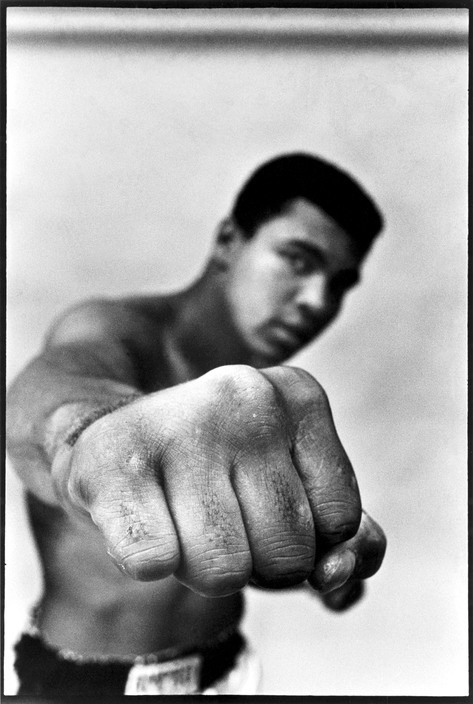