Minamata disease is first discovered in the Minamata fishing village of Kumamoto province, Japan. Doctor Hajime Hosokawa officially states on May 1, 1956, that there is an epidemic of an unknown disease that attacks the central nervous system.

Doctors conclude that the disease is caused by the methylmercury present in the waste of the Chisso industry. The plant’s toxic waste contaminates from 1932 to 1968 (the year the plant stopped using mercury in production) the marine area of Minamata Bay and the Shiranui Sea, mercury infects fish and shellfish, and when people and animals, eat them, are poisoned by mercury.

The disease is progressing rapidly.

The damage caused by mercury in the fetuses appears as cerebral palsy.

From 1971 to 1973 photographer Eugene Smith and his wife Aileen live in Minamata for the sole purpose of turning people’s eyes on Minamata’s disease. For decades, the deaths of humans and animals had been provocatively ignored by the Japanese government covering the activities of the Chisso industry.

In those three years, Smith had taken thousands of photos. These photos were published in Asahi Camera Magazine, Camera 35, and Life magazine entitled “Death-Flow from a Pipe,” and were published in a book entitled “Minamata: The Story of the Poisoning of a City.”

From the beginning Smith had realized that he needed a very powerful photograph, which would become a symbol of Minamata’s disease and the struggle that people were making to deal with it.

And he found this image on the face of Tomoko and Ryoko’s mother. Born in 1956, Tomoko was blind, deaf and paralyzed. Her mother bathed her at noon and Smith knew it. She was the one who urged Smith to photograph the deformed body of her daughter while bathing her.

The photo was planned very carefully, after Smith checked the light, he decided that three in the afternoon was the best time to take the photo, and took the famous photo in December 1971

In January 1972 Eugene Smith, his wife and the victims of the disease met with a company representative at the factory in Goi. The spokesman did not appear and they were suddenly attacked, at the behest of the company, by a savage attack by 100 Yakuza members. Smith was badly injured in the eye and head and had to be hospitalized in America. Smith survived, but with very limited vision in one eye and his health more fragile. 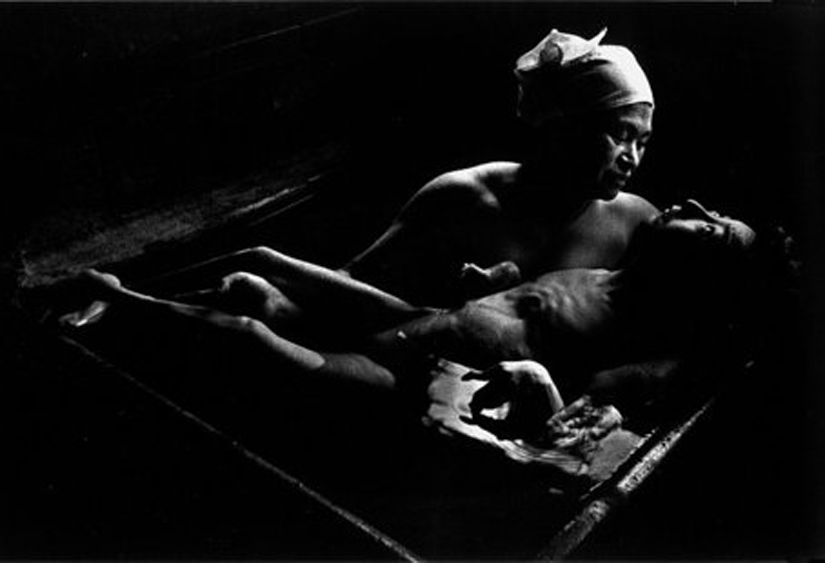